My new business cards arrived today.  My wife found out that I have never actually had "official" business cards in my working career.  As the excellent manager that she is she knows how valuable they can be as a morale builder, so she ordered them so I have something to hand out to the other parents at the park or whatever. 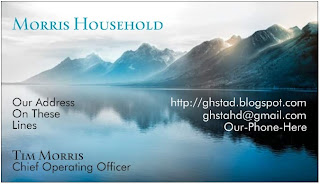 Pretty snazzy, eh?  We ordered them from Vista Print.  Not bad for free cards really.  Of course after they "give" you the cards they try to get you to order other stuff (hats, magnetic signs, posters, et. al.) with your card on them.

Strangely enough these actually do make me "feel better" about things.
Posted by Unknown at 6:57 AM 2 comments:

First Day on the New Job

Well, today was my first official day as the Stay-at-Home partner.  It was a little bit of a challenge getting out of bed since I "didn't really have anything to do today".  then I reminded myself, forcefully, that my new job was working to help keep the stress off my partner and to keep things up around here as a part of that.  So I roll out with the wife and see her off to work with a hug and kiss.  We've been driving in to work together for almost three years now and that isn't going to be an option anymore.  It was a bit harder saying goodbye this morning than either of us really thought it would be.

The dogs are confused having me home all day, and were under foot the entire time.  I will admit to working into my new role slowly, and the only real work that got done was some cleaning in the Master Bath.  Having a dentist appointment in the middle of the day didn't help of course.  I made a decision in the middle of things too.  There is going to be a level of "good enough" that I can live with.  Shooting for perfect is just going to lead to failure.  I stood up from scrubbing, got things cleaned up, and noticed a couple of places where I apparently missed with the brush.  Know what?  They will be there in a couple weeks when I hit the shower again.  Besides, Chris was thrilled with my efforts.

I did manage my one major goal for the day and there was a hot home-cooked meal almost ready for here when she got home.  GO ME!

I don't know how many updates there are going to be here in the beginning.  It'll probably be mostly random thoughts and observations until Thumper arrives in November.  For those of you who don't know "Thumper" is the place holder, or in-utero, name for the wee womb squatter.  We were told early on that, since we are waiting to find out the gender, we weren't allowed to refer to the baby as "it" and every time we said "them" or "they" people asked us if were having twins.
Posted by Unknown at 5:16 PM 2 comments:

Last Day on the Old Job

Today was my last day on the old job.  Yesterday the crew took me out to Tyler's Taproom in Durham for my going away party.  I bought a round for everyone, we sat and talked a great deal, they even said nice things about me.  Think the beer I bought might have had something to do with that?

I am glad I got in at my regular time and got to work finishing up the last few things.  My exit interview was supposed to be at 3:30 and all of a sudden, at 10:30, they are moving it up to up to 11:00.  SO I'm running around trying to say my goodbyes, police up that last of my office stuff, and suddenly I realize I can't find my keys.  Eventually I find them on the floor back in the loading dock area.  Typical crazy day in the asylum I guess.

I am going to miss the people I was working with.  Fortunately I will be staying in touch with everyone, and many of them are planning on coming to the Baby Shower.  On to bigger and better things though, and remembering that life is never static, and there always another change around the corner.
Posted by Unknown at 5:18 PM No comments:

...from the inside.  It's the first movement she's been able to feel, and it's a big relief to her.  For the last couple of weeks she's really wanted to start feeling something, and we had just been at the doctors for a check up and been bemoaning the fact that the baby was being too quiet.  I am predicting that soon Chris will be  complaining about how Thumper won't stop doing cartwheels.
Posted by Unknown at 6:19 PM No comments:

After a long series of discussions with my beautiful wife the two of us decided that the way I can best support our soon to be growing family would be to become a stay at home dad.  Part of that entails my leaving my job early and getting the house and life ready to bring a new baby into it, so today I informed my boss that I would be departing no earlier than the 1st of August, and no later than the 31st of August.  This will give me a few months to get things locked down and as ready as anyone can be to begin a family.

I suppose I should begin by giving everyone reading this a little background and all that stuff.  I was born in 1968 and will be nearly 45 years old when my child is born.  Yes, I really do have a full head of greying hair.  Born in West Virginia, moved to Ohio...moved to Germany thanks to the United States Army...then here to beautiful North Carolina when I left the service.  In between there were a lot of adventures, more than a few birthdays, and one divorce. I began my current job almost 5 years ago and have been a Scientist for nearly 15 years.   I like to think that all of this gives me a better than even chance of getting more things right than I do wrong.  Not sure this or anything can really prepare you for becoming a parent.

I met my wife, as many do these days, through an on-line dating site and after our first date we have been inseparable.  On New Years of that same year I proposed to her, under a Blue Moon, and we were married the following April.  Now I have wanted children forever, but I had pretty much given up on the idea once I hit 40 and I was still not only single, but not really dating seriously.  Much to my pleasant surprise one evening Chris starts talking to me about "how do you feel about having a baby?"  My memory says I was very well spoken and erudite in my response.  I have a feeling it was more along the lines of "Du-hu, gorsh yes."

I really don't know what this blog will end up being, and I am certain I don't know why you are reading it, or what you want it to be.  I guess we'll both stick around and see where we end up, k?